This project began at the University of Texas at Austin in Dr. Tanya Clement's Fall 2017, Programming for Cultural Data Analysis graduate course.

The data and images represent artistic depictions of Vergil's Aeneid as well as scenes of characters or themes from the general Aeneid mythology not included in Vergil's original work. These featured works of classical reception are primarily from the mid-15th to mid-20th centuries.

The compilation of artistic depictions of the Aeneid will be useful to art historians, classicists, literary scholars, historians and especially those interested in comparative arts.

Philip Hardie, author of The Last Trojan Hero: A Cultural History of Virgil's Aeneid,  notes that “the Aeneid, as the central non-biblical narrative text of western literature, naturally became the source for innumerable artistic representations, above all in painting, but also in sculpture, as well as in the minor arts: prints, mailoica, cassoni (Italian wedding chests), metal plaquettes” (Hardie, 2014, p.189).

Historically, the Aeneid is the second most popular work of mythology to be depicted in art, after Ovid’s Metamorphoses (Hardie 189). Paul Barolsky, in his work on Ovid's Metamorphoses in art states that, “just as there is still no definitive catalogue of Ovidian works of art, there is no standard or exhaustive bibliography on this art. A critical bibliography of Ovidian art would be immensely valuable and I hope that somebody will write it” (Barolsky, 2014, p. 2). While I do not see myself attempting to compile such a massive dataset of depictions of the Metamorphoses, compiling a dataset of a “smaller” epic will demonstrate cultural data analysis’ utility in interdisciplinary humanities study.

This database of images can also be used as a pedagogical tool for teachers who want to integrate classical reception and art into their lessons. For example, as an analytical exercise, students can draw their own conclusions by analyzing the metadata and images.

The majority of my dataset was compiled using the APIs from three cultural heritage institutions: the Rijksmuseum, Metropolitan Museum of Art and Europeana digital collections. Using APIs, I was able to systematically gather around 1,000 metadata records. I also supplemented my dataset with records gathered from traditional print indexes of classical mythology in art. You can find these print indexes and other relevant resources in this Zotero folder.

Currently, only 300 images are uploaded but the goal is to continue to tag characters, scenes and book information to the remaining 700 records. The metadata records were initially retrieved in JSON format and converted en masse into a CSV using Python 3 in Jupyter notebooks. Employing APIs to gather data demonstrates the importance of metadata standards, how to use Python to systematically gather data and the magic of OpenRefine to clean data for analysis.

Using data visualization software, Tableau, I modeled relationships among artwork metadata features related to Books I-XII of the Aeneid, time period and mythological iconography. To further interact with the data, please visit the link below the image to view the visualizations on my Tableau Public page. 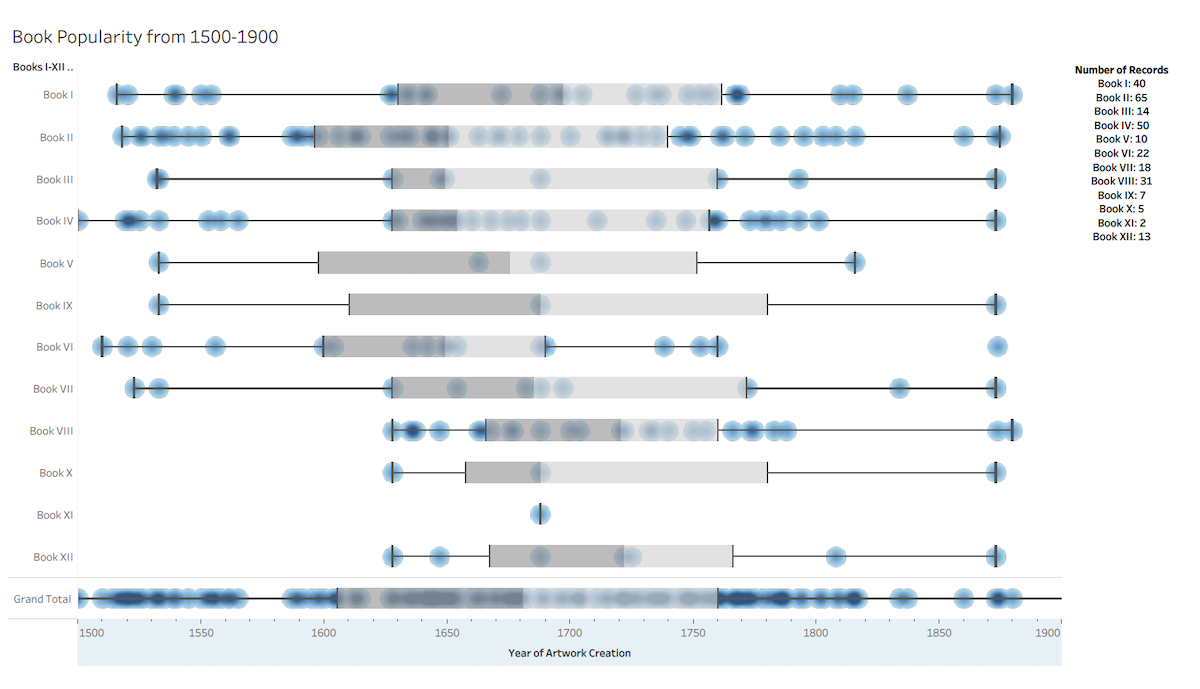 A box and whisker plot showing records of artwork created in 1500-1900 for Books I-XII of Aeneid. “Grand Total” displays distribution of 300 artistic depictions of all books of the Aeneid over time. View on Tableau Public

Traditionally Book II, IV and VI have been most popular because of the infamous Aeneas Flees Troy, Death of Dido and Aeneas’ Descent into the Underworld scenes, respectively. The visualization confirmed that while also raising a question as to why Books VIII-XII were not depicted from 1500-1620. I am interested in exploring this gap by analyzing my original larger dataset of 1,000 records. 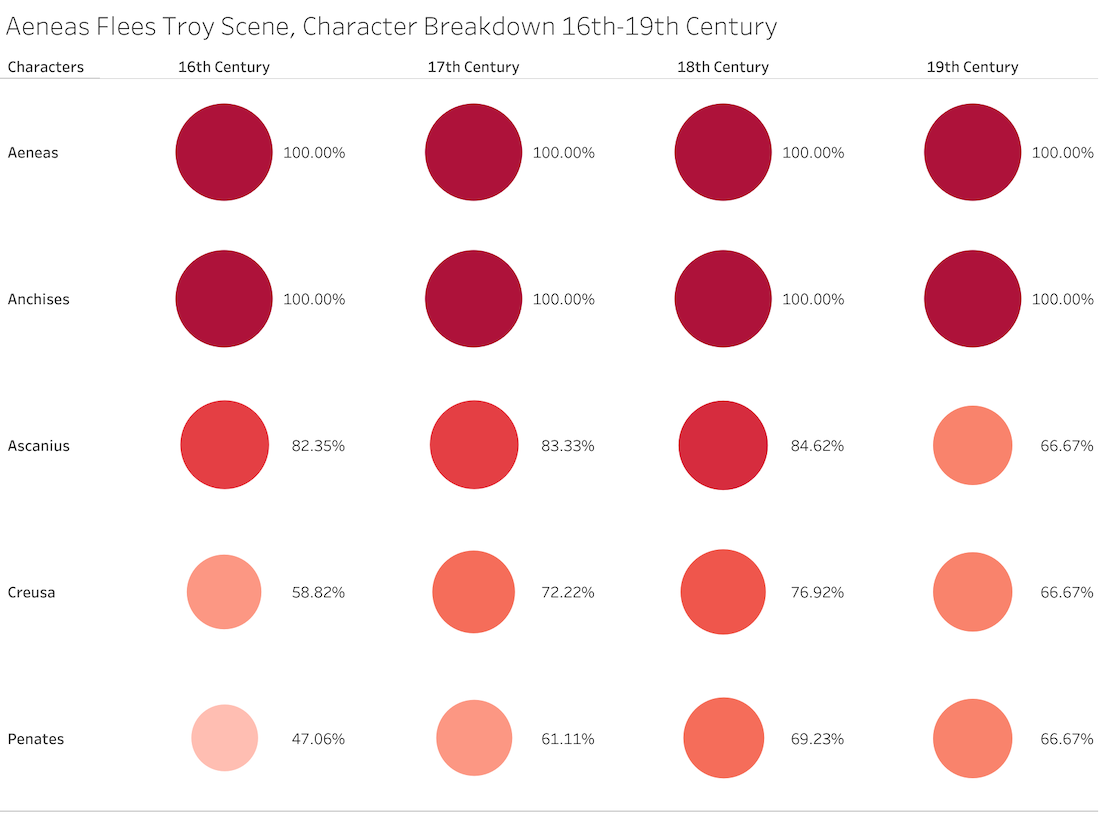 My hypothesis reasoned that Aeneas’ wife, Creusa, would disappear over time from the fleeing Troy scene. The analysis does not support that but I am interested in testing that hypothesis with a larger dataset.

Dataset Future: While Mirabile Visu currently only features 300 images, the full dataset contains over 1,000 metadata records. The goal is to add the full dataset and their images to the Omeka site.

The full dataset, the site's theme and files can be found on my GitHub page.

Please feel free to contact me with any questions, feedback or suggestions for the site at acasarez[at]utexas.edu . You can also view my professional portfolio at here at aycasarez.com